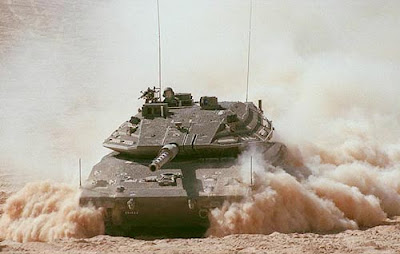 In June 2002, the Israel Defence Force (IDF) unveiled the latest of the Merkava family Israel’s main battle tanks, the Merkava Mk 4. Compared to its predecessors, the Merkava 4 has been extensively improved and features new armour protection and gun and electronics systems, enhancing crew survivability, lethality and mobility. The Merkava 4’s armor has been acknowledged to be a form of hybrid armour, but that’s as far as we know and the rest is classified. The Merkava 4 has been designed to fight a battlefield which is engulfed with chemical weapons, artillery fragments and sniper fire. 4 cameras are embedded in armoured boxes on the tank’s superstructure, giving the driver an all round vision, including previous blind spots to the tank’s rear & sides, on a high resolution monitor. 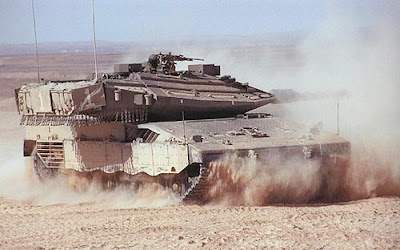 Brief History of the Merkava
The Merkava (Chariot) family of tanks is amongst the most advance tanks currently in service, with the Merkava Mk 1 entering service in 1982 and fought the Lebanon war. For General Tal (the father of the Merkava), the utmost focus in designing the Merkava, was that it had to offer a high level of crew protection. The IDF found that whilst damaged tanks could be rapidly repaired, it took more time to get replacement tank crews. Consequently, priority was given to protecting the crews from injury. Unlike traditional MBT designs, the Merkava has its powerpack in the front rather than the rear. This means that the tank’s engine & transmission provide added protection to the already thick armour.
I’ll put up a more detailed history of the Merkava in a separate post :)
And now... pics of my completed model of the Merkava Mk 4. The model was built from Legend's full resin kit. 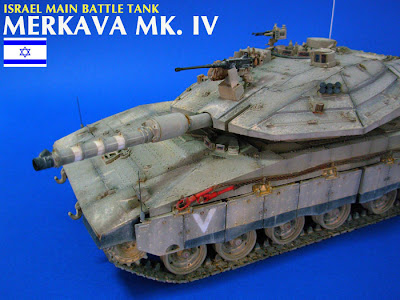